I'm Allergic to Eggs, but Not Chicken? 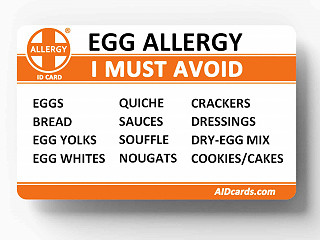 This is the random thought that kicked off random thoughts in food and nutrition. I’m not allergic to eggs, I eat them very regularly. I just thought this was sort of a fascinating concept, that you can have an allergy to eggs (all of a chicken), but not be allergic to chicken. As a result of digging into this question a little further, I learned some pretty interesting stuff about eggs composition and allergies in general.

Allergies are an antigen specific process where your immune system recognizes a specific protein incorrectly as a pathogen. When you come in contact with the allergen, the body produces an immune response, what we know as an allergic reaction. In the case of having an egg allergy and not being allergic to chicken, this is a due to the distinction of the difference between the embryotic proteins of an egg compared to the fully developed muscle tissues of a full grown chicken.

There are two major proteins in egg that commonly cause egg allergy, and they are both found in the egg white. The first, ovalbumin is the major allergen present in the highest proportion. The second protein of concern is ovomucoid. Egg yolks are not commonly found to cause an allergic reaction themselves, but are still not considered safe to eat for someone with an egg allergy. Even though eggs mature to become chickens, it is the egg whites gelatinous mix of proteins versus the chicken meat network of muscular proteins that differentiate the allergies to these two similar foods. There is no ovalbumin or ovomucoid present in mature chicken protein, therefore, no allergic reaction!

Eggs are one of the most common food allergens, and people with an allergy to chicken eggs may also be allergic to other types of eggs, such as goose, duck, turkey or quail. This is due to the allergy to ovalbumin, which is the primary protein in all poultry egg whites. Overall, an allergy to the protein found in chicken, or any poultry, is much less common than an allergy to eggs.

Food For Thought: Bird-Egg Syndrome – An allergic reaction, generally, asthma and gastrointestinal distress, resulting from contact with proteins found in bird feathers, excrement, serum, and meat, leading to the development of an egg allergy.